Celebrate Veterans Day 2016 By Attending a Parade or Event Near You!

Highlighted Below are Some Wonderful Annual Veterans Day Events 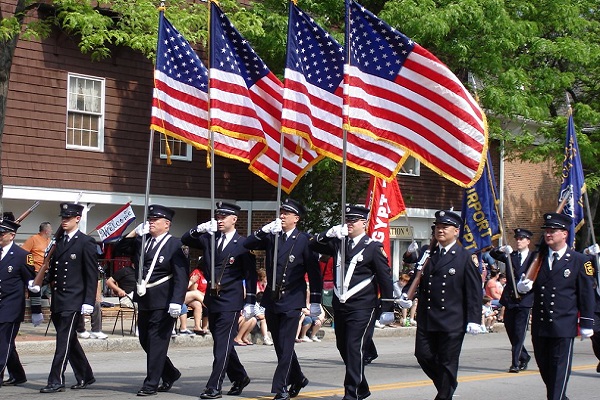 The sole purpose of America’s Parade is to honor the service of our veterans and to salute our currently serving military. The parade features over 250 groups and 20,000+ participants, including veterans of all eras, military units, civic and youth groups (including Junior ROTC), businesses, and top high school marching bands from across America. Floats, military and vintage vehicles and other special elements add to the excitement, which is viewed by over half a million spectators.

This year’s Parade will commemorate the 15th Anniversary of 9/11, with special recognition of our Afghanistan, Iraq, and other Post-9/11 veterans, as well as our First Responders.  It will also mark the 25th Anniversary of the Desert Storm.  The United States Coast Guard is this year’s featured military branch.  The Army, Marines, Navy and Air Force are also represented.

The parade will occur on Friday, November 11 (Veterans Day), rain or shine. It starts at approximately 11:15 AM (at the conclusion of the Opening Ceremony, see below) and concludes around 3:30pm. The parade goes north on Fifth Avenue, from 26th to 52nd Street. (Map) The route is 1.2 miles, and takes approximately 30 ~ 35 minutes. The parade is preceded by our traditional Opening Ceremony in Madison Square Park (24th Street & Fifth Avenue). The ceremony begins at 10:00 AM and concludes with a wreath laying at the Eternal Light Monument at 11:00 AM (The 11th hour of the 11th day of the 11th month). Seating is available at the opening ceremony, with preference given to our disabled and elderly veterans. LEARN MORE!

A patriotic ceremony honoring America’s military members and Veterans is scheduled for Friday, November 11, 2016, at 11 a.m., in Arlington National Cemetery.   A wreath -laying ceremony will take place at the Tomb of the Unknown Soldier, followed by a ceremony inside the Memorial Amphitheater, adjacent to the Tomb. The event will commence with a prelude concert by The United States Navy Band at 10:30 a.m., inside the amphitheater.

Attendees are strongly encouraged to arrive early. Every effort is made to perform security screenings quickly and efficiently, but the lines to pass through the screening stations may become lengthy. The last shuttle from the Welcome Center and Fort Myer departs at 10:15 a.m. or once capacity is reached.

The ceremony is free and open to the public. For those interested in observing the wreath ceremony, space is limited to standing room only. Inside the Amphitheater, seating is available on a first-come, first-served basis. Tickets are not required to attend and we anticipate the event to conclude at Noon.

At 8 a.m., the cemetery gates open and the free shuttle service will begin transporting guests from the Arlington National Cemetery Visitor Center to the Tomb/Amphitheater. Walking from the visitor center to the Amphitheater is prohibited. Free shuttle service will end at 2 p.m. Parking in the cemetery’s visitor parking is free for the entire day. The Visitor Center is approximately one-quarter mile from the Arlington National Cemetery Metro station on the Blue Line (between the Pentagon and Rosslyn stations).

For over thirty years, the HRCVO has been coordinating the Veterans Day Parade and associated events. Each year, one of the HRCVO member organizations co-sponsors the parade. This year the La Societe Des 40 Hommes Et 8 Chevaux (40 and 8) is the co-sponsor organization. In addition to the parade, a short ceremony is held at the Tidewater Veterans Memorial immediately following the parade and a luncheon honoring our Veterans is held at the Doubletree Hotel next to the Virginia Beach Convention Center at approximately 12:00 PM.

The Veterans Day Parade is sanctioned by the Department of Veterans Affairs National Veterans Day Committee and the Mayors of Chesapeake, Norfolk, Portsmouth, Suffolk and Virginia Beach who sign a proclamation resolving that “citizens, businesses and organizations demonstrate due appreciation, admiration and respect for all veterans who have served our great nation”. LEARN MORE!

On November 12, 2016 you can attend the parade that kicks off at 11:00 am from the intersection of Quarry Rd. and Prescott Ave. in Historic Manassas.

The parade is the largest Veterans Day Parade in Northern Virginia and in the Washington, D.C. area, and will include military units and vehicles, local veteran organizations, military and high school bands, and pipe and drum corps teams. LEARN MORE!

The Veterans Day Story... At the 11th hour, on the 11th day of the 11th month in 1918, the guns of WWI fell silent and "Armistice Day" was born. Eight years later a Presidential Proclamation invited people to observe the day with appropriate ceremonies. With the passage of time it was changed to "Veterans Day". The national focal point for the official Veterans Day observance is at the Tomb of the Unknowns where the Presidential wreath is placed.

The National Veterans Day Committee of the Department of Veterans Affairs, in Washington, has again, this year, selected Dallas as a Regional Site for the observance of Veterans Day. Click HERE to see all of the nationally recognized Regional Sites. LEARN MORE!

Veterans Day will be commemorated Friday in downtown San Jose with events including a parade that will close some downtown streets.

The activities start with a 10:30 a.m. ceremony at Plaza de Cesar Chavez. At noon, the parade will start on Santa Clara Street just east of Highway 87 and proceed down Market Street to the west side of the plaza.

In addition to closures of the parade route, traffic will be kept out of the staging areas on Almaden Boulevard and Notre Dame Avenue. Learn More!

“A Tribute To The Guardians Of Freedom” Recognizing Our Veterans of Every Era and Our Serving Soldiers, Marines, Sailors, Airmen, Coast Guardsmen

The San Diego Veterans Day Parade is produced by “Veterans Week San Diego”, an all-volunteer team of Veterans and citizens of all ages and walks of life, dedicated to honoring Veterans annually during “Veterans Week”, as a program event of the Veterans Memorial Center. We rely upon donations from the generous residents of the San Diego area, as well as financial support from the regional industry and business sector, and the support of our partners in the non-profit sector.

Parade Entry Applications must be made in this website on line. See Join the parade page.

The 2016 route along San Diego’s prestigious Embarcadero mandates a limit on the total length to ensure that all accepted applicants for entry can be started and finished during our permit time 11:00 am to 1:00 pm. Applications will be accepted in this website up to the deadline of October 24, 2016. The Parade Board will make approvals of entry applications based on the criteria for meeting the parade purpose of honoring the service of Veterans. All Congressionally-chartered Veterans Service Organizations whose applications are received by the deadline are assured entry places.

The Marshaling Area, for assembling all entered units prior to the start, is in the N Harbor Drive regular traffic lanes, which will be safety barricaded directly south of Grape Street for two blocks, on three lanes of N Harbor Drive. This will require exact execution of Parade Day Marshaling Instructions by all entrants, to ensure arrival before the Marshaling Area is closed.

Traveling to the Parade Viewing Areas by taking the Trolley to the Santa Fe Depot or the next closest trolley stop is strongly recommended for ease of access and enjoyment. LEARN MORE!

If we are MISSING a Veterans Day Parade or Event Near You, Please Add it in the Comments Below!

THE MEANING OF VETERANS DAY: A celebration to honor America's veterans for their patriotism, love of country, and willingness to serve and sacrifice for the common good.

We would like to say a special "Thank You" from MilitaryBridge to all military members past, present, and future for your amazing dedication and sacrifices you and your families make every day to protect our freedom!