Veterans Day is a time to honor those who have served in the United States Military.  We are most grateful for the sacrifices made for our freedom.  On Veterans Day many businesses honor our military members past and present with Free Admission, Free Meals, and other freebies.  Colonial Williamsburg has always been a big supporter of the military community.  This Veterans Day Weekend, Colonial Williamsburg is proud to offer Military Members FREE ADMISSION as a way to say "Thank You" for your service to our country. 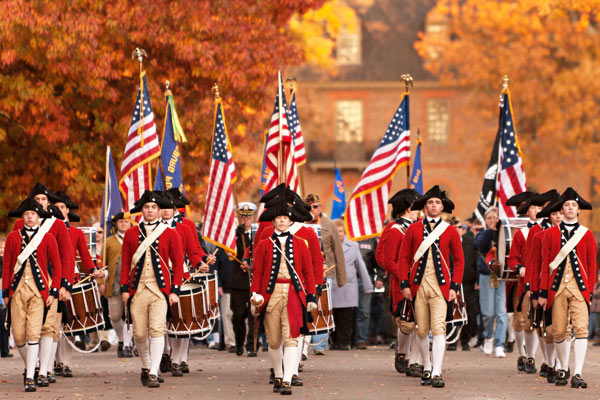 Explore the Revolutionary City, hear the stirring cadences of the Fifes and Drums, join in the patriotic events, and browse the Art Museums of Colonial Williamsburg.

Join us as we honor America’s veterans in a celebration of their patriotism and willingness to sacrifice and serve our country. Immerse yourself in an 18th-century battle, take part in a military march, or witness armorers hard at work on this special weekend of remembrance.

Join us on Veteran's Day as we honor those who serve in the military. An afternoon march and ceremony honoring America's veterans highlights the day. The event features the Colonial Williamsburg Fifes and Drums, Military Programs Staff, and members of Williamsburg community veterans groups. All armed forces veterans are welcome and encouraged to participate. A commemorative service behind the Courthouse will be held after the march.