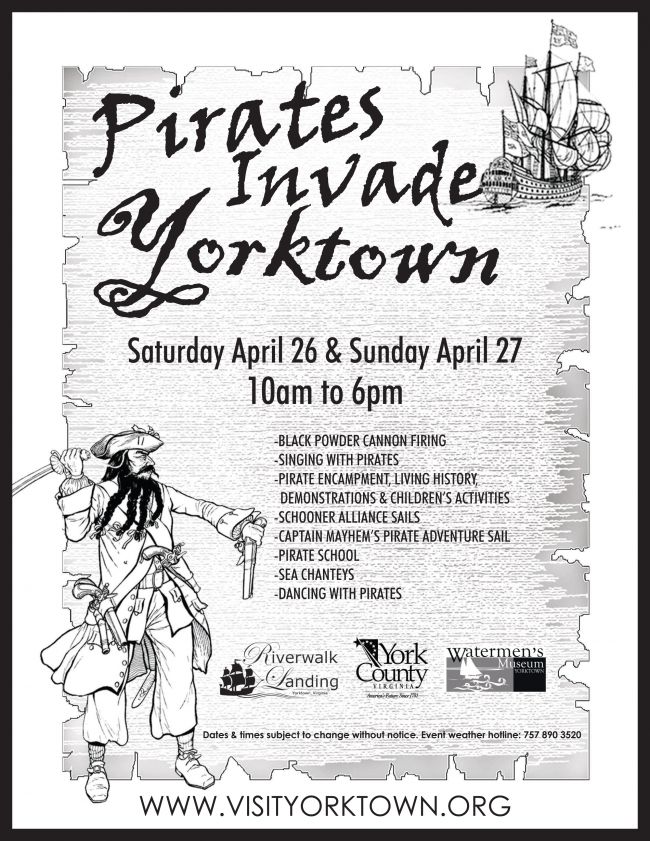 If you have not been to the Pirate Invasion before in Yorktown, I highly recommend it!  It's a great time, all are in full costume, speaking the Pirate language, and the ships are awesome!   Don't miss it!

Pirate groups representing the accurate representation of seafaring life in the late 17th and early 18th centuries will embark upon Riverwalk Landing in Historic Yorktown on Saturday, April 26, and Sunday, April 27, from 10 a.m. to 6 p.m. for a fun-filled mix of activities, pirate encampments, vendors and demonstrations.

Activities for the weekend event will be scattered throughout Riverwalk Landing, to include the Watermen’s Museum grounds with the central gathering point on the green area adjacent to the fountain and Riverwalk Restaurant.

Yorktown’s Pirate ship will be sailing with Captain Mayhem and crew at 11:30 a.m. on Saturday, April 26, and Sunday, April 27. Children in Captain Mayhem’s School of Piracy will learn to set the sails, steer the Schooner and fire the cannon. There is a $5 discount for anyone dressed as a pirate.

Yorktown’s 105-foot Tall Ship Schooner Alliance will also be sailing at 2 p.m. and 6 p.m. on Saturday and Sunday. The 2 p.m. cruise will feature Lady Pirates. All cruises on Saturday, April 26, and Sunday, April 27, are $5 off for anyone dressed as a pirate. For more information on these cruises please call Yorktown Sailing Charters at 757-639-1233.

This event is free and open to the public. Free parking is available at the Riverwalk Landing parking terrace, York Hall, and other designated public parking lots throughout town. Guests are encouraged to utilize the free Yorktown Trolley, which operates daily from 11 a.m. to 5 p.m.

The Watermen’s Museum is offering free admission on Saturday, April 26, and Sunday, April 27.