The Virginia Living Museum is really gonna BUG you in 2016.  Opening on Dec. 31 is BIG BUGS. This larger-than-life animatronic exhibit will feature six super-sized critters including the Madagascan Sunset Moth, the Bombardier Beetle, Dragonfly, Stag Beetle, Orb-Web Spider, Say’s Firefly. There will also be a caterpillar photo-op and a display of live insects, all designed to showcase a bug’s life and why insects are important. We need insects just as much as they need us. They are very important to our ecosystem.

“This exhibit will encourage an appreciation of the amazing diversity, complexity and beauty of earth’s most common animals—insects, which make up 99% of life on earth,” said Deputy Director Fred Farris. “Mistakenly considered pests by people, bugs by far provide beneficial roles for life on earth. We’re hoping that after seeing this exhibit, people will be less likely to stomp on or swat the bugs they encounter.”

The super-sized (5 to 12-feet-long) invertebrates are made by Billings Productions, the creators of animatronic dinosaur exhibits. All have been painstakingly designed based on extensive research and in consultation with experts. Made from a combination of steel, fibreglass and a urethane compound skin material, the bugs are powered by a pneumatic system that enables smooth and fine movements.

From super-sized to actual size, visitors can also view live invertebrates in displays, including Giant Hissing Cockroaches that live in the savannah forests of Madagascar, Blue Death-Feigning Beetles, Mealworms – the larva of the Darkling Beetle, Tarantulas and Millipedes.

On weekends, the museum will present theater-style live programs in the Changing Exhibit Gallery. What makes a bug a bug? With their unique adaptations for survival and incredible diversity, insects have a vital role in the world’s living systems. Learn more about these fascinating animals – and some of the animals that rely on them. The live insects in the program will be video magnified and shown on a 65-inch screen. Programs are at noon, 1 and 2 p.m. 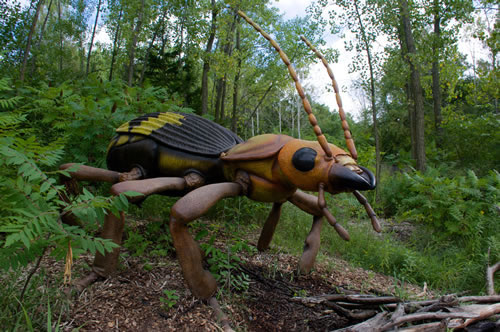 In addition, the Museum will display 20 banners of color photographs of invertebrates by famed Harvard scientist/photographer Piotr Naskrecki. Naskrecki is a Polish-born entomologist, photographer and author who is currently at the Harvard’s Museum of Comparative Zoology. As a photographer, Naskrecki strives to promote appreciation and conservation of invertebrate animals – insects, arachnids, and their kin – by capturing both their beauty and roles as vital, often critically important members of the Earth’s ecosystems.

“These are some of my favorite images, each showing an organism that has a special significance to our own species, the global ecosystem, or me personally,” Naskrecki was quoted in the Daily Progress when the banners were hung on the Downtown Mall in Charlottesville. “Some were selected simply because I was impressed with the intricacies or colors of their bodies. A couple of photos show insects discovered and named by me. All show that insects are as worthy of our attention as any other animal on Earth.” 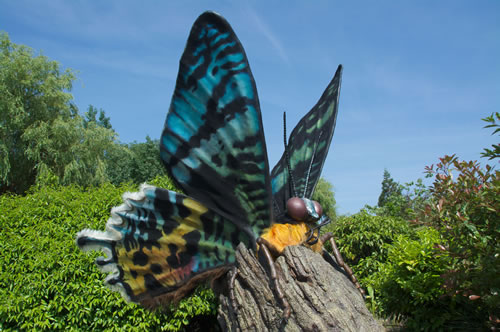 Learn more about The Virginia Living Museum, other exhibits, events, and their #MilitaryDiscount on MilitaryBridge!