This is a sponsored post written by MilitaryBridge on behalf of T-Mobile. All opinions are entirely my own.

We love sharing companies that go all out to show their appreciation of military service.  T-Mobile has a long history of military support through their various hiring initiatives and military discounted plans but the recent announcement of T-Mobile ONE Military takes everything to the next level.

T-Mobile is deeply commited to showing their support of the military community.  In a recent press release, John Legere, president and CEO of T-Mobile states, “We’re going full-throttle to support our military and their families.”  "This is T-Mobile’s biggest discount ever for families. Our biggest hiring commitment ever. And, we’re putting our biggest network investment ever – our $8 billion in nationwide spectrum – to work so that military communities aren’t left behind when it comes to 5G. Why are we going this big? Because ‘thank you for your service’ – that’s why.”

In a nutshell here is the new T-Mobile ONE Military Deal:

And, it gets even better!  Did someone say, "Free Netflix, unlimited talk, text, and data" and much more below!

Here is what is included in the T-Mobile ONE Military Plan:

T-Mobile ONE Military is the biggest military discount in wireless. According to the T-Mobile Press Release here is what you can expect:

"Where the Duopoly give military $15 off per account or 15% off – roughly what they tack on to the bill in taxes and fees – the Un-carrier is going big. It’s 20% off the first line and Half Off up to five additional voice lines. The first line is $55 with AutoPay – normally $70. And it’s Half Off after that, up to six lines – just $25 for the second line and $10 per line for the third through sixth lines with AutoPay. Altogether, that’s a massive savings. On average, a family of four can save $665 compared to AT&T and $764 compared to Verizon per year with their military discounts".

“What the Duopoly do for military – help cover taxes and fees – is what we do for everyone already,” said Legere. “Now, we’re also going big to save military customers hundreds per year – all on America’s best unlimited network.”

T-Mobile's commitment to military members & families goes much deeper than just military savings.  They want to make a difference in the lives of military members and families.  They understand the unique challenges that many military spouses face due to the transient military lifestyle.  In a recent article by CBS News, April 18, 2018, it was stated that, "38 percent of military spouses are underemployed, compared with about eight percent in the economy as a whole. About 12 percent are unemployed, nearly three times the national rate. It can cause huge financial hardships for military families".

For military spouses, finding employment at new military duty stations is a big problem and T-Mobile is stepping up to make a difference in the lives of military spouses and families nationwide. T-Mobile has pledged to hire 10,000 veterans and military spouses in the next five years. T-Mobile also understands the challenges that many military members face when transitioning out of military service to the civilian workforce.

T-Mobile has commited not only to hire veterans but also help with career readiness programs.  T-Mobile is commited to helping alleviate that challenge through their partnership with the non-profit FourBlock.  FourBlock provides career readiness programs for military members transitioning out.  T-Mobile is providing funding to help expand the program to 20 cities along with making the service available online so all military members can take advantage of this program.

T-Mobile is going big in support of the military community not only through savings, hiring & career initiatives they also want to make sure you're COVERED.  T-Mobile is dumping more than $500 million to expand their LTE coverage and capacity focusing on areas around U.S. Military Installations.

Interested in learning more about T-Mobile ONE Military, their current specials & making the switch to the Un-Carrier?

Disclaimer: MB partipates in affiliate programs therefore these listings may contain affiliate links which means MB receives a commission when you purchase from some of the online retailers. 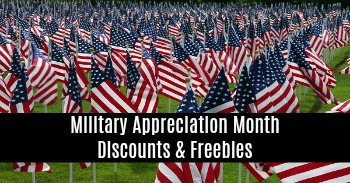 NATIONAL MILITARY APPRECIATION MONTH DISCOUNTS, FREEBIES, AND EVENTS FOR MAY 1-31, 2018!